As I mentioned yesterday I'm just now beginning work on a new project for 40k, a purely-Slaanesh themed Chaos Daemons army. I did all of the planning for this one prior to my move to NC so I am excited to have it underway after several months of waiting. While keeping in mind lower point level games, I'm primarily aiming to build a 2000 point army, though it should ultimately top out in the 2250 to 2500 point range. This will likely be my main hobby focus over the next couple of months. Allow me to explain why... 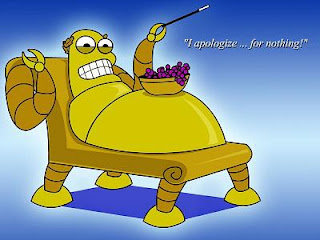 Until recently Chaos Daemons as an army had almost no appeal for me. As a longtime Chaos Space Marines player it took me quite a while to adjust to losing access to my favorite daemon units and getting saddled with flavorless generic ones instead. (By the way, Summoned Lesser Daemons are once again one of my favorite units for my Chaos Marines army, but I do still miss those T5 Plaguebearers.) I unfairly held this against Codex: Chaos Daemons when it was released, as well as the changes to their fluff with regard to the Chaos gods newly acquired spirit of cooperation. Partisanship may be a dirty word in politics nowadays but I personally enjoyed the hostility Chaos Daemons felt toward the minions of the other gods. Lastly, their whole approach to deployment seemed at the time too whacky and gimmicky for my taste, and so I therefore made up my mind that the mortal followers of Chaos would be enough for me.
Nonetheless my sentiments softened over time and I found it fascinating to hear or read about others' experiences collecting and playing Chaos Daemons. I liked the new plastics kits and eventually came to appreciate the changes that had been introduced as well, in particular seeing their unique method of deployment as, if nothing else, an interesting change of pace for those playing against the evil critters. I thought that as a Chaos Daemons player the Daemonic Assault rule might get tiresome after a while, but that it would offer a fun and novel challenge for their opponents, so that seemed cool. With so many other armies calling out to me, this gradually developing respect for Chaos Daemons was still not sufficient reason for me to take the plunge into collecting my own batch of Daemons. 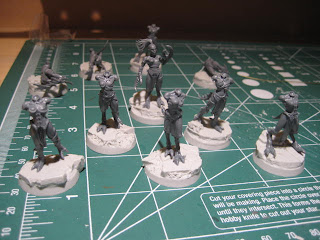 It was actually not until the new Codex: Grey Knights came out before the idea of playing Chaos Daemons became a serious consideration for me. Though I should not have been surprised having seen their beautiful range of minis, I had not expected the Grey Knights to take off in popularity to the degree that they seemingly have this year. It seemed too bad that there wouldn't be more armies of Daemons for them to fight against as no doubt the rise of the Grey Knights has been something of a downer for both veteran Chaos Daemon players as well as for those thinking about pledging themselves to the dark gods. Having a new Codex on the loose that was specifically designed to beat up on your army would I think be discouraging no matter how otherwise appealing the bullied army might be. So it was with this set of assumptions that I decided I wanted to build a Chaos Daemons army.
Let me be clear that I do not think I have any better chance against the Grey Knights than anyone else using Chaos Daemons. In fact I am fairly sure I will not play the army as well as many others could and will face even more of an uphill battle against GK armies than would normally be expected. Nor am I doing this to try to prove anything to the Internets. (Yeah right, if anything I'd just prove what an ass I am!) Rather I decided to collect Chaos Daemons just so that anyone I happen to meet with their own army of Grey Knights would have the opportunity to play them against what is supposed to be their preferred enemy. It seems kind of funny to me to imagine all of these Grey Knight strike forces scouring the universe and battling against all manner of xenos, rebels, and traitors, but saying to each other the whole time, "Where are all the bloody Daemons?" And I imagine it must also be frustrating as well to own a Grey Knights collection but then rarely or never encounter a Chaos Daemons army against whom to match your army of goody-goody heroes.
Therefore my initial reason for starting this new army project was to provide a classic foil for whenever I happen to cross paths with a Grey Knights player looking for an amenable antagonist. I am by no means a gamer masochist, though I do like a good challenge and whether I win or lose any particular game is irrelevant to my enjoyment of 40k. Plus should I actually manage to win a game then it would be all the sweeter for the extra difficulty involved, and while losing I can at least still revel in the casualties that I inflict along the way, knowing that my guys have merely been banished back to the Warp, but every Grey Knight killed is a serious loss to the Imperium. So even if this puts me squarely in the land of moral victories, in my mind that's still better than outright defeat. :) 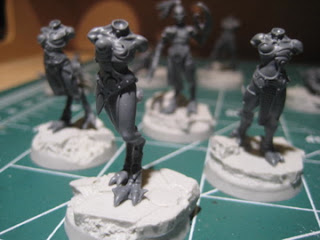 Okay, I see that's all the time I have for tonight, and yet so far I've only managed to explain why I've chosen to collect Chaos Daemons, though not specifically the mono-god, Slaanesh only approach. Therefore I'm going to make this a two parter and will go over my choice of Slaanesh in part 2 as well as getting into the particular elements of the army. So until next time, happy painting and gaming!
Oh, and be sure to indulge in your favorite vices, too. Hooray for Slaanesh! ; )
PS for Silar Lannanaris of The Fallen Princes blog - I've not given up on my Raptors army, nor am I turning my back on the esteemed Badab Veterans. I have a couple of reasons for letting this new project take precedence over my other armies which I'll explain soon, though I did want to let you know it might take me a little while afterall before I get back to my Space Marines. I'll be back onboard with the group and in the Maelstrom just as soon as in can.... Sorry, buddy!
Posted by Papa JJ at 11:55 PM