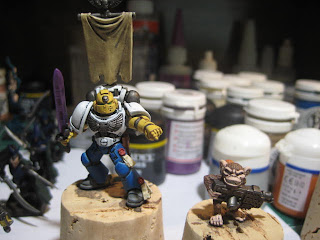 Last May I spent some time working on one of my most drawn out painting projects, Captain Homer and Mojo, and posted an updated about them here. After writing about the progress I'd made, I went on to spend another evening or two later in the month working on Homer and Mojo before once again setting the pair aside. While the painting itself had not advanced very far, the noteworthy accomplishment was in finally attaching Homer's head to his body. Woo-hoo! Having left the last time with Captain Homer still in a headless condition, tonight I thought it would be worthwhile to update this project, even though it's been a while since I actually sat down to work anymore on it. 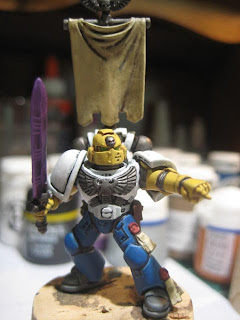 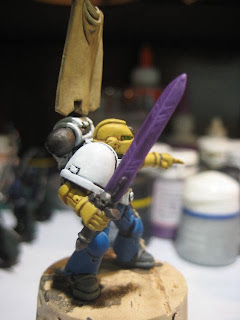 Before gluing on the helmet I finished bringing the white areas of power armour up to a pure Skull White. I tried to keep the paint thinned enough so that the white wouldn't buildup too much, but I then wasn't able to entirely prevent it from running into some of the darkened lines which define the various armoured segments. I'd like to tidy that up somewhat, in particular on the should pads and a few other more noticeable places. Otherwise I plan on leaving the rest as is due to the likelihood that trying to fix anymore would just lead to new mistakes in need of further correcting.

Once I was satisfied with the white areas around Homer's collar, backpack, and should pads, I evened out the yellow of the power armour and added a layer of highlighting on top of that. I would save the final round of yellow highlighting, however, for after having glued in place the helmet. This seemed reasonable to me should the final positioning of the helmet would alter which lines I wanted to emphasize the most. Additionally the blue legs are now either finished or else close to it. They could probably use one more pass of highlights so as to pick out the uppermost edges of armour as they catch the light. Lastly Captain Homer's power sword is the result of lots of trial and error until I finally had an effect that looked decent enough to me. Well, so long as I didn't look too closely it seemed alright. :)

At the same time that I was working on Captain Homer, I also made some more progress on his buddy, Mojo the Helper Monkey. At this point everything is blocked out in the basic colors and has received at least one round of shading and highlights. I'm rather pleased with how his face and other fleshy bits turned out. He seems to me crazy and dangerous, just the way a monkey with a flamethrower should look. There's still some highlighting and detail work to do but I think this monkey is close to finished. 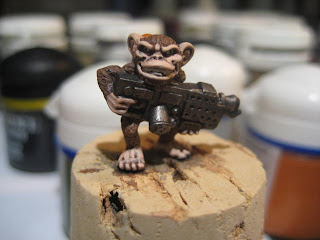 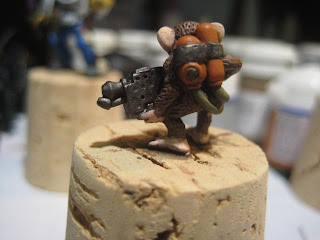 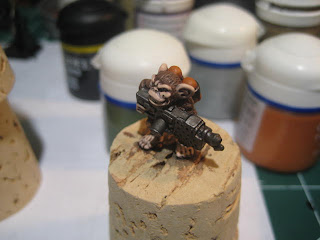 I don't know when I'll return to work some more on Captain Homer and Mojo. One reason I've been hesitant to go any further is because I haven't yet finished planning out the design for Homer's back banner. Also I'm nervous about freehand painting a design onto such a relatively large area... that a mistake there could really botch the whole thing. Nonetheless I'm pretty sure that once I have the details sorted out to my liking, I will be ready to paint the banner if only to have that particular step behind me. And besides, how hard could it be to paint a big donut and some beer cans?

So that's all I have for now with regards to these two miniatures. Hopefully it won't take another three months before I'm ready to put together the next progress update on them. I'm not getting my hopes up, though, as these guys seem to have become permanent residents of my WIP shelf. Nonetheless it would be really nice to finally move on to the next batch of Stonecutters. Ah, someday... someday.