Earlier today I was able to recover a large amount of data from my old computer and so I'm in the mood to celebrate this bit of good fortune. Among the recovered goodies were all of my photographs from this year's trip to Adepticon, and therefore tonight I'd like to share a few of my favorites. First up are a couple of crazy count-as Flamers of Tzeentch followed by a count-as unit of Flesh Hounds. These are from the gorgeous Daemons of Chaos army painted by Jeff Schiltgen for Adepticon's 1000 point "It's How You Use It" tournament. I could be mistaken but I think he won a Player's Choice award for his well painted army and display board. 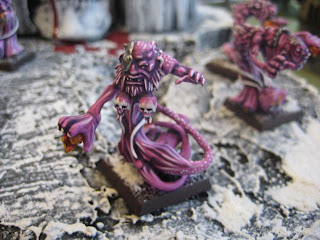 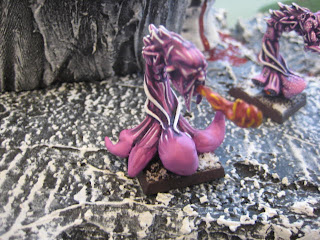 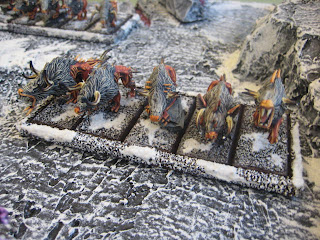 Unfortunately a lot of my pictures of this army did not turn out very well, being in many cases much too blurry for me to use. The next photograph is itself rather blurry though perhaps not as bad as some of the others. Still I think the unit of Bloodletters is pretty enough to be worth a look despite my shoddy camera work. (I apologize to Jeff for not doing his army justice.) 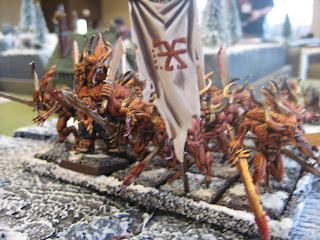 I spotted this next set of Lizardmen miniatures during a break between games and had to take a few minutes to admire the uber cute approach to modeling Stegadons. While these lumbering beasts may not seem as intimidating as the standard Stegadon model, I think they have a very pleasant and light-hearted charm that you rarely find in wargaming. Unfortunately I forgot to find out the name of the army's owner, though I do remember him being quite generous with his time as I asked questions and took my pictures. If anybody should happen to recognize this army and know the name of its painter, I would happily update this to give him his due credit. 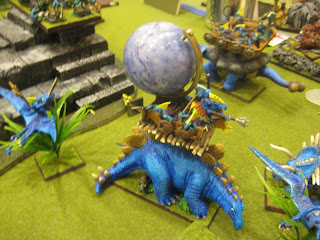 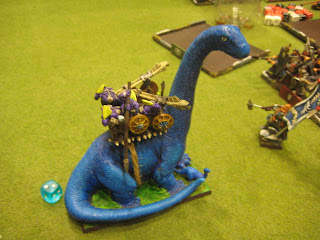 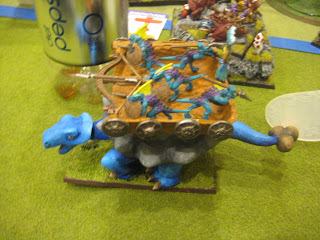 There were of course many other fantastic armies to drool over at Adepticon. However my schedule was primarily filled with gaming this year and so I did not have as much time as before to wander around and take pictures of all the cool miniatures. Although I had a blast playing in the events, in the future I think I would prefer to leave more time unscheduled so that I can take advantage of having so many lovely armies gathered in one place. It's a great opportunity to be inspired and see some amazing works of art.

Happy painting and gaming!
Posted by Papa JJ at 11:45 PM