While cleaning out the garage today I came across an army transportation bag that had been missing since we moved into the new house almost three months ago. Along with an assortment of blisters, sprues, and other random miniatures, perhaps most importantly this bag is where I had stuffed most of my collection of Tyranids for the move to North Carolina. Even better is that the 'nids managed to survive the trip sustaining only minor damage to a few models. Woo-hoo! This is surprising to me because of the lack of care with which I packed them. After lifting out the upper layers of hobby detritus, this is what I saw today in my army bag: 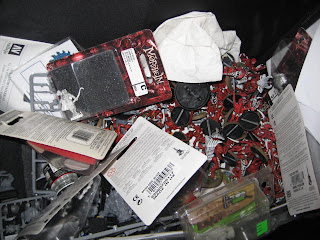 Wow... I'd forgotten just how haphazardly I had crammed these minis into the bag. There in the picture you can see the uppermost portion of my Tyranid swarm in a tangled mass of chitin and claws. I knew for quite a while leading up to our departure for the mountains that I would not have enough foam or other safe means of storage for all my miniatures and armies. In particular I had never bothered to work out a good way of transporting my Tyranid army as I rarely ever had a reason to take them anywhere. Rather than come up with a plan to handle this I instead ignored the problem for as long as I could until that last night in our previous home.

Finally with a healthy sense of desperation and growing panic I then set about packing my bugs. There was room left in the foam that I used for my Dark Elf War Hydra in which I was able to fit the Tyranids' winged Hive Tyrant, as well as the winged Warriors and my Zoanthropes, too. The rest of the army however would have to tough it out jammed together in my last army bag, which also served as the receptacle for whatever other remaining loose hobby junk that I came across in my haste. I was worried about the 'Nids but hoped that the minis would be packed tightly together so as to prevent them from shifting around much and crashing into each other. As unlikely as that seemed, at the time it was the best option I could think of in the few hours left to pack.

It was therefore to my great surprise today when discovered that the irrepressible Tyranids did in fact survive and in relatively good condition no less. After unpacking everything and sorting out all the minis, I could find only three damaged models. Of the medium bugs a single diminutive claw arm had popped off of a metal Ravener, and one Warrior's Rending Claw arms broke away, too. The only small bug in need of repair is one of the Hormagaunts who snapped off of his base, something which I expected many more Gaunts to have suffered due to their fragile ankles and minimal contact with their bases. Fortunately none of the large bugs however sustained any damage. Incredibly it looks like it should all be fairly easy to fix... nice! 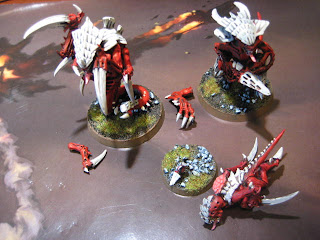 So here is the entire swarm of Tyranids unpacked and deployed onto my desktop: 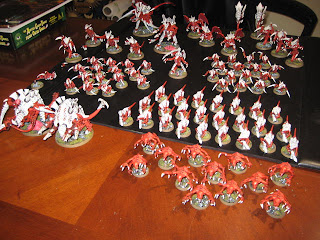 Under the previous Codex I could play games comfortably in the 1850-2000 points range with this army, although by maxing out on biomorphs this could be pushed up to around 2200 points. It has been a long time since I looked at the most recent Codex: Tyranids, but I believe the army now comes in right around 1500 points with the current set of rules. Thus it seemed like it would cost more money than I was willing to spend in order to update and expand the army to take advantage of the new strategic options and units now available to the Tyranids.

I've since revisited this and decided earlier this year that I would go ahead and make a few more additions to the army. I now have a unit of Hive Guard and a single Trygon/Mawloc kit waiting to join Hive Fleet Hydra. I would also like to pick up a couple boxes of Gargoyles if for no other reason than to celebrate their transition from plastic to metal. Lastly I think I need to sort out my Raveners as they currently cannot be fielded legally as a WYSIWYG unit, so I'll likely also pick up a box of them eventually. While I was not terribly thrilled with the current Codex: Tyranids upon its release, I'm at least interested in them enough to again put my 'Nids back onto the hobby to-do list. Maybe I'll even provide for them foam or a case of their own, though I doubt that will be happening anytime soon.

Happy painting and gaming!
Posted by Papa JJ at 11:38 PM