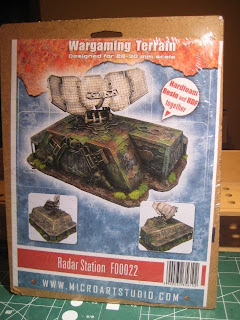 Months and months ago, I posted this about my interest in playing some new games this year. I solicited suggestions but then in typical fashion never got around to following it up. Well one of the games I picked out is Infinity by Corvus Belli, which I chose partly because it allows for a much greater density of terrain coverage than you typically find in games of 40k. Working on terrain is one of my favorite aspects of this hobby and so I liked the idea of playing a game that encourages you to have a lot of scenery and cover on your tabletop.
Therefore for diceRolla's first Infinity-centric post I thought it would be appropriate to review a couple of hardfoam terrain pieces from Micro Art Studios, namely the Radar Station and the Pump Station. I bought these especially for use with Infinity in mind, but as they are meant to be generic 28-30mm sci-fi scenery pieces, I think they would fit comfortably into most futuristic settings. You'll see in most of the pictures that I used Sergeant Homer as my standard reference for scale, which handily also serves to provide a little glimpse of these terrain bits in a 40k context as well. Most of the official photos on the MAS site show them beside Infinity models, therefore it seemed like it would be more helpful to use a Space Marine for my own pictures. 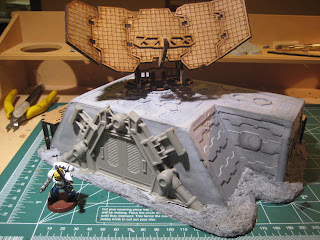 So with that out of the way let's get to the terrain, starting with the Radar Station. It's comprised of three different materials as seen below: the main hardfoam structure, a resin piece for the doorway, and a sheet of pre-cut HDF pieces from which the radar itself and the building's walkway are assembled. The second picture is of the bottom of the terrain piece to show what this hardfoam stuff is like for those who have not encountered it before. It's pretty strong but can be brittle and it becomes gritty when broken or crunched. 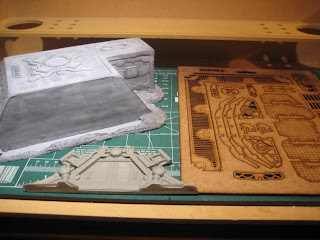 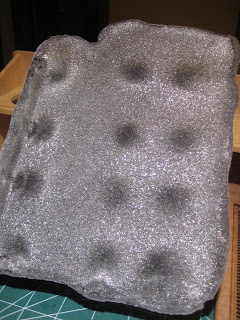 The resin entryway piece had minor flash and will need some tidying but was for the most part in good shape. The hardfoam had several rather more noticeable problem areas, in particular warpage on the top and on two side sections. 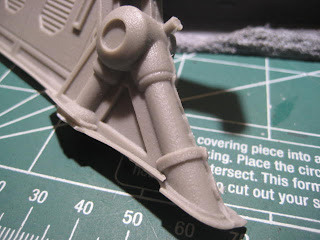 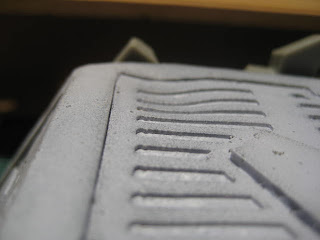 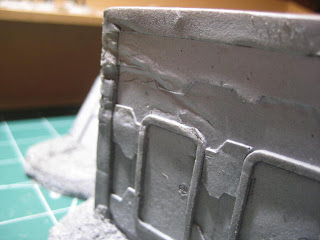 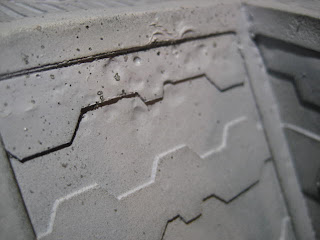 I don't think any of these flaws are that bad besides causing a little annoyance. Instead what bothers me is that MAS charges what I consider to be a rather premium price for their products. Thus I did not expect there to be quite so many areas of damage right out of the packaging. To be fair I also was not expecting the foam to be perfect either, just not this bad. What surprised me the most however was when I realized the HDF sheet may have been cut backwards from the way it was intended to be cut. You can see with the walkway piece that on one side there is a little bit of etched-in detailing, while the other side remains unadorned. 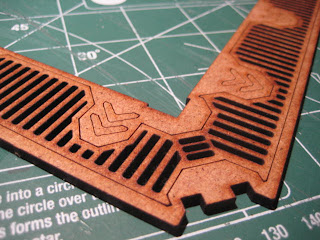 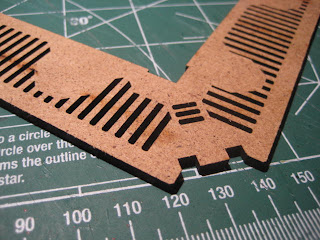 The problem I encountered is that on mine the walkway only fits onto the building if you have the detailed side pointing to the ground instead of pointing up. D'oh! I'll likely use some thin cardboard and strips of plasticard to breakup the flat surface of the HDF, thus adding back some visual interest to it. That way it's an easy enough fix. What surprised me about this is the apparent carelessness in its manufacturing which I did not expect from MAS. I still think it's a great piece of terrain, though perhaps somewhat overpriced for the quality you get. 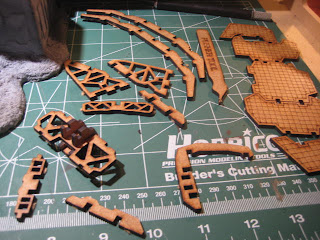 The HDF radar was easy to assemble and there were no problems due to the radar panels' detailing having likely been etched into the wrong side of the sheet. I did a dry run without gluing any of the pieces to test out their fit and to make sure I understood how everything was supposed to go together. It was a very straight forward process but you do want to be gentle when punching the individual pieces off of the sheet so as to avoid any of them breaking or tearing. 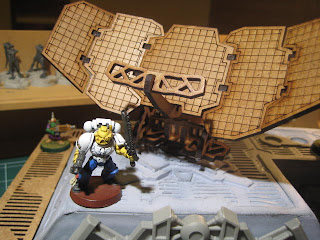 Here then are some final pictures of how the Radar Station looks when assembled. 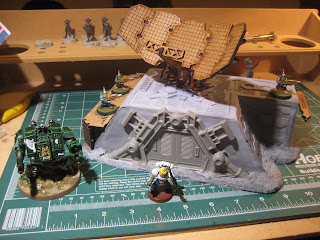 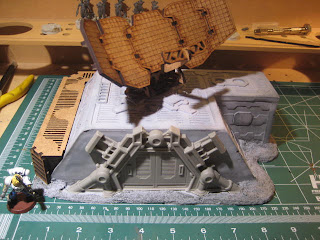 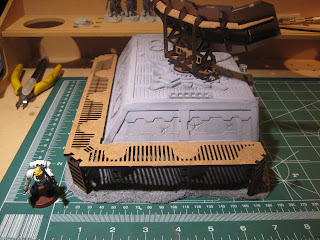 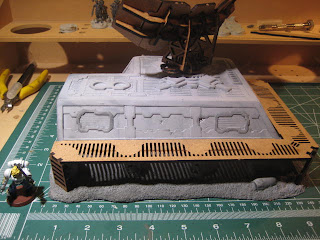 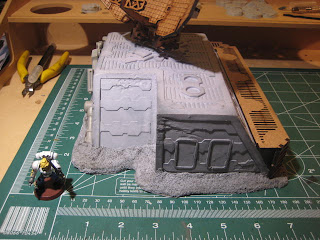 Moving on to the other scenery element for tonight's review, the Pump Station consists of just two pieces, a big chuck of hardfoam and a resin doorway. As with the Radar Station, the hardfoam was damaged in a number of places. In this case it's primarily the coils of those duct-looking things to either side that have suffered the most. 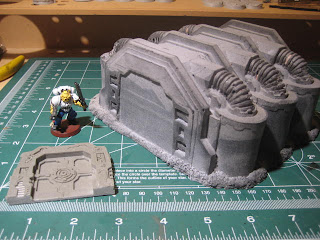 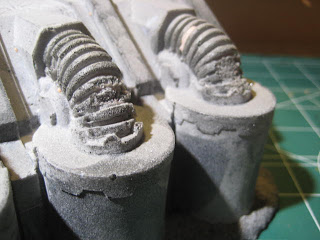 The above unpleasantness is on one side.... 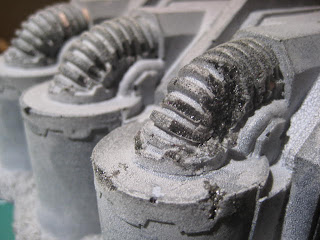 And this is on the other side. :(
There are also a few noticable areas of warpage scattered on the surface of the piece. Otherwise I think it is a really nice bit of scenery and will look quite spiffy on the table once fixed up a little and painted. I appreciate its overall simplicity. 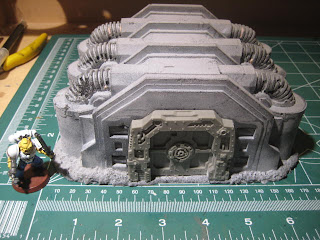 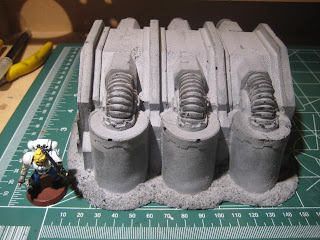 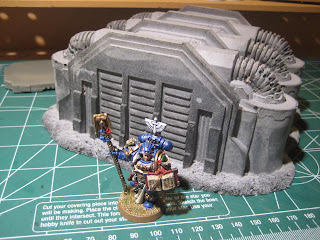 Once again I believe the damaged areas should be easy to repair with greenstuff, or I may just leave them that way and paint them as battle damage. However considering the price MAS charges for their terrain, I was not expecting them to be in such rough condition. I still have some of GW's old hardened-foam terrain pieces that even after years of use are in better shape than these new ones from MAS. 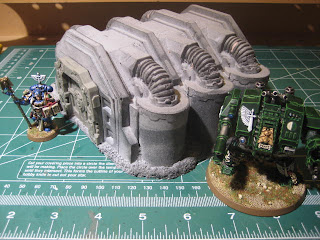 Overall I am satisfied with the MAS Radar Station and Pump Station, though I feel the damaged and problematic areas were excessive. I'm excited to see them painted and I suspect I will be happy to have added these pieces to my collection of terrain once they're finished. As a consumer I'm left with a less-than-thrilled feeling, but I'll get over it as they're still some pretty cool pieces of terrain. :)
That's it for now, happy painting and gaming!
Posted by Papa JJ at 11:40 PM